In all the insanity of the past two weeks, I completely neglected to mention that the October edition of Non-Fiction by Non-Men went up ten days ago!

For the full interview, see it on Fiction Advocate.
Originally published on October 14, 2015. 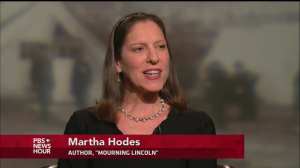 In the seventh of her series of interviews with women who write nonfiction, E.B. Bartels converses with historian Martha Hodes.

Martha Hodes is the author of three books: Mourning Lincoln (Yale University Press, 2015), The Sea Captain’s Wife: A True Story of Love, Race, and War in the Nineteenth Century (W.W. Norton, 2006), and White Women, Black Men: Illicit Sex in the Nineteenth-Century South (Yale University Press, 1997), and the editor of a collection of essays, Sex, Love, Race: Crossing Boundaries in North American History (New York University Press, 1999). The Sea Captain’s Wifewas one of three finalists for the Lincoln Book Prize, and White Women, Black Men was winner of the Allan Nevins Prize for Literary Distinction in the Writing of History. Hodes has been awarded fellowships from the National Endowment for the Humanities, the American Council of Learned Societies, the Charles Warren Center at Harvard University, the Massachusetts Historical Society, the Schomburg Center for Research in Black Culture, and the Whiting Foundation, and she served as a Fulbright Senior Scholar in Germany. Hodes is also an elected fellow of the Society of American Historians and has consulted on many documentaries, museum exhibitions, and radio and television shows, including the 2010 documentary The Loving Story about the 1967 U.S. Supreme Court case Loving v. Virginia. She is Professor of History at New York University.