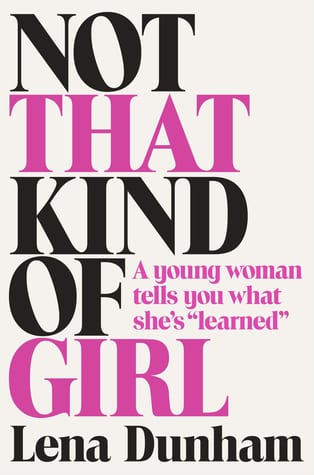 Good nonfiction needs not just the THEN but also the NOW. When a writer tells a story from her past, if the story is really weird or funny or excellent, it is tempting to tell the story and leave it at that. But to make nonfiction really thoughtful and powerful, a writer needs to reflect on the story from her past as her present self and write about, “Why does this story matter? Why am I writing about this now? Why am I still thinking about this all these years later? Why do I think anyone except for me would care about this story?” I am aware of the importance of this because this was the number one criticism I would receive about my work in my MFA nonfiction writing workshops: “E.B., this is funny, but what’s the point? What does current E.B. make of all this?”

Lena Dunham, in her book Not That Kind of Girl, has got all of the THEN but very little of the NOW. Dunham likes to tell a story, but then let it hang. That works sometimes, to let the reader draw her own conclusions, or when the context and commentary around the story as it is being told makes the meaning of the story so obvious that by the time you reach the end, the reader knows exactly its point. But the letting-it-hang happened so often in Dunham’s book that sometimes it felt Dunham was dropping stories for shock value and nothing more. I found myself often thinking, “And….?” while turning the page and seeing that was it. The story was over. Figure out what it means yourself. But instead of this being deep and thought-provoking, which sometimes can happen when a writer lets a story stand for itself, because this happened with almost every story in the book, it made everything feel sort of flat and superficial. Funny, but surface level. Dunham isn’t afraid to tell all her most embarrassing and humiliating stories, but, at the same time, I felt that she seemed afraid to get into the messy darkness of what the stories mean and the purpose they serve.

My favorite moments were when Dunham would actually stop and look at herself, like when she realized that her distraught reaction to her sister’s coming-out was her own self-involved grief over not knowing her sister as well as she thought she did. Additionally, I thought her essay about the confusing stress and anxiety one feels as a rape victim was the most powerful piece in the book. But that essay felt like an anomaly. Moments of self-reflection and analysis were rare, which is too bad, because self-analysis would also help Dunham look less like a privileged child of the New York art world. For example, she drops casually that she hosted a dinner party at age seventeen that was featured in the New York Times style section, with no commentary on how rare and absolutely nuts it is that a TEENAGER’S DINNER PARTY would be featured in the NEW YORK TIMES STYLE SECTION.

I also think including more self-reflection and self-analysis in the book would help especially in situation where the world interprets one of your stories as you molesting your sister. In order to prevent that, throw in some commentary on that right in the heart of the essay (“Looking back on this now, this seems extremely inappropriate…”) instead of just letting the story stand by itself. Cut off the critics before they have a chance to say anything, by writing, right in the piece itself, “I know, this was so fucked up, right?” (Also, if you didn’t want to be compared to a sexual predator, maybe don’t make that comparison yourself? How did that simile get by her agent/editors/readers?)

I think this book had the potential to be much better than it was – just like, in general, I feel Dunham has the potential to be a much better feminist and activist than she is. I enjoy Girls. I find it entertaining. I can relate to a lot of the feelings of being a twentysomething-white-woman-living-in-New-York. But it’s not groundbreaking for me, it’s not a show I need to watch again and again because I connect to it on such a deep, personal, emotional level. It’s surface level funny in a lot of ways, which is exactly how Not That Kind Of Girl felt to me. Same shit, different medium. Which is a bummer, because I was hoping for something more. I also think that the book fell short because a lot of it felt rushed, like the publisher was trying to get it out ASAP because Dunham is relevant right now, and many of the chapters felt like filler (the lists, the annotated emails — I felt they could have been funnier or more in-depth and mostly they just seemed like the editor said, “Shit we need another essay but don’t have time, throw in some lists to make the book longer!”) I also think the rushed feeling made for some sloppy decisions, such as the sexual predator metaphor (see above).

Well, at least the cover design is cool?

I had to take a break from reading the book which is why it took over a month to get through, and, in the end, I only finished it to learn what NOT to do and say as a white feminist.

As a white feminist myself, I would like to avoid being of the problematic variety.