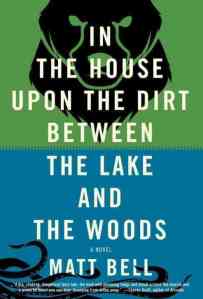 Don’t be intimidated by the long title. I still can’t remember it exactly unless I’m looking at the blue-and-green cover: The House In The Woods By The Lake? The Dirt Near The Lake On The House? It doesn’t matter though, because all you need to remember is the name Matt Bell. The man is brilliant.

As a nonfiction writer, I live in awe of people who can create whole worlds from their own brains. I can describe people I know, I can recreate a place that I’ve been, but when it comes to new people and new places, I am at a loss. I end up simply masking real things and having a lot of twenty-something female protagonists named “Phoebe.” In particular, when it comes to fiction, I worship magical realism, because I cannot comprehend the thought process behind its creation. The first time I read The Master and Margarita by Mikhail Bulgakov, my brain exploded: the devil shows up in Moscow and has a pet demon-cat, while, meanwhile, Pontius Pilate’s trial of Jesus is happening in a parallel timeline? How do you even come up with that? But it makes so much sense. What?

The book opens with the introduction of a nameless male husband narrator, his wife, and a bear, and describes the husband and wife’s failed attempts to have a child and their new life together in this house on the dirt between the lake and the woods. It feels almost like Bell is telling his reader a classic fairy tale at bedtime as he begins his story. His style is mythological, using strong, simple language that causes the story to feel that it has been passed on for generations. At first I was skeptical that Bell could pull off this tone for a whole three hundred and twelve pages, and at times it does move a little slow, but over all I think the book is successful due to Bell’s characters. Even though they are never named, I found that I could still connect deeply with the protagonist and his wife despite their abstract and seemingly symbolic nature. It is all thanks to the remarkable way that Bell is able to portray complex feelings through a simplistic folk tale style. His language is so on-point that is strikes hard and fast. Sometimes Bell uses grotesque visceral language that wrenches at the gut – much in the beginning when describing the many miscarriages of the wife, reminiscent of Cider House Rules by John Irving – and I could feel waves of nausea and had to walk away from the text. In the same vein though, Bell’s beautiful descriptive words have a similarly powerful but calming affect. He finds the most lyrically unusual ways to describe some of the most ordinary things – woods and lakes and houses – while never straying from his clear, direct style. One of the lines that caught my breath was how Bell described time slipping away: “The days were thieves. And the happier ones the worst, their distractions allowing the hours to pass unnoticed, allowing the minutes to be snatched away without knowledge of their passing.” In The House Upon The Dirt Between The Lake And The Woods reads like a fairy tale with the emotion and psychology of a contemporary novel.

Bell is a classic storyteller, and once he grabs his reader by the hand, he doesn’t let go. I happily and agreeably followed Bell through his pages where magic and reality blend seamlessly – of course the wife can create objects by singing, of course there are two moons, of course a mysterious creature lives at the bottom of the lake, of course childbirth is painful and traumatic, of course it must feel isolating to live alone in the woods… Bell’s story twists and weaves, and it feels at time like he is Scheherazade in One Thousand and One Nights, adding and building as he goes, but smoothly and never losing his readers’ interest, keeping his readers awake night after night. But it’s ok, because when you’re wrapped up in a Matt Bell story, you don’t want to sleep anyway.