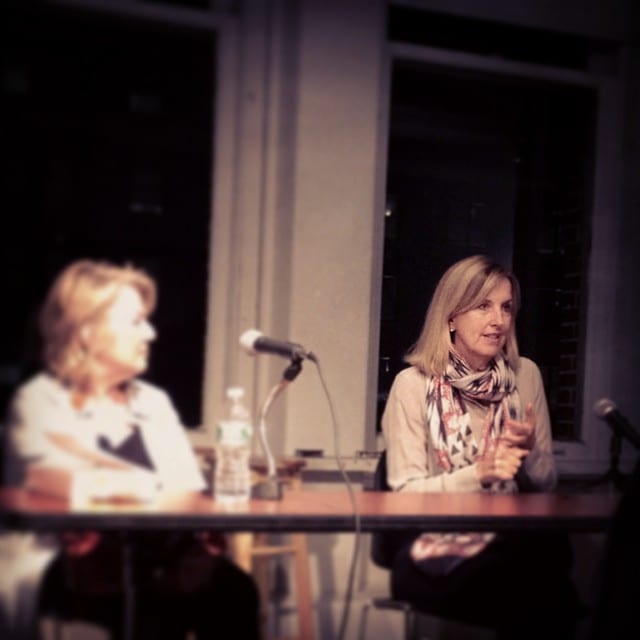 When I started in the MFA Writing Program at Columbia University’s School of the Arts last fall, I was pummeled with the names of more writers than I knew existed. I walked around with my tail between my legs most of the time. Before starting grad school, I felt I had spent my whole entire life reading, but apparently all the wrong things. It seemed every sentence addressed to me started with: “You’ve really never heard of….?”

I hid out with my syllabi, trying to catch up as fast as I could. I plowed through Adrian Nicole LeBlanc (who I now admire) and Janet Malcolm (who I now respect) and Eudora Welty (who I now adore), just to name a few, and I felt that I had no time, with all this reading, to go to any of the Columbia sponsored after-hours creative writing guest lectures. Besides, why bother going when I hadn’t heard of the person or read their work anyway?

But then sometime last spring, I was lured to one such talk by an author I hadn’t heard of – maybe it was the prospect of free pizza and free wine that comes with these events, of which I had none in my own apartment – and I was hooked. I realized I could still get a lot from listening to a writer I didn’t know. Plus, I’d walk away with about a dozen new titles for my never-ending To Read List. I promised myself that in my second year at Columbia, I would go to every single extracurricular writing chat, even if I hadn’t heard of the author.

This is how I ended up in the presence of Diane McWhorter last week. I am ashamed to admit it, but up until I saw her face on a flier in the Writing Program Office, I hadn’t heard of the Pulitzer Prize winning author of Carry Me Home: Birmingham, Alabama, the Climactic Battle of the Civil Rights Revolution. At 7pm last Wednesday, eating a free sandwich, sipping my plastic cup of free nondescript white wine, I nodded along to Ms. McWhorter as she described her decision to write about race relations in her home city during the 1960s. Then, as I was wiping a bit of excessive mayonnaise onto my paper plate, something magical happened. One of my professors, Lis Harris, who was moderating the discussion asked Ms. McWhorter how she had evolved from a clueless, naïve, Republican girl into the flaming liberal woman that she is now, when Ms. McWhorter spoke those charmed words:

“Well, I went to Wellesley College.”

I put down my sandwich. I looked up. It was as if fairy-dust had been thrown in my free wine. Suddenly I was hanging on Ms. McWhorter’s every word, scribbling them all down in my small notebook. She talked about starting at Wellesley in 1970 at the height of the counterculture, the freaks, and the drugs. She went into detail about taking a poetry class at Wellesley with Robert Pinsky, who criticized her poems as cliché, and then about how she studied abroad in Paris and was further inspired to write by the authors who came to the Shakespeare & Co. bookstore. I pictured this woman lying on the grass in Tower Court reading a book or swimming at night in Lake Waban, long blonde hippie hair floating behind her. Just by saying that she had gone to Wellesley College, I suddenly felt I knew her better. Instinctively, I understood a part of her that, I was certain, no one else in that room got.

I was a bit disappointed when Ms. McWhorter moved on from talking about Wellesley to talking about her writing process, but the Columbia MFA student in me was happy to hear what she had to share. She talked about the experience of writing a book; how “when you’re in it, it’s hell,” a sentiment to which I could relate with my thesis. She recommended we “go ahead with life” while working on our projects, that sometimes life becomes a great inspiration. She discussed her need to use primary sources to really feel and understand the material enough to write about it vividly. She told us about her father’s reaction to his portrayal in Carry Me Home; he hadn’t realized “his life was so meaningful.” My favorite, though, was what her aunt – another Wellesley alumna – said in response: “Your father was much more interesting on the page than in real life.”

At the end of the too brief hour-and-a-half, I hovered near the front of the room, waiting for a chance to speak with Ms. McWhorter. When she finally had a moment, I told her how much I enjoyed what she had to say – discretely omitting that I had not yet read her book – and then I spoke the magic words of my own:

“I just had to tell you, I went to Wellesley too.”

“You did?” Her voice, laced with a soft southern drawl, warmed immediately. “And now you’re here? At Columbia?”

“Well good for you!” she said. We exchanged a few more words, and then Ms. McWhorter had to prepare to leave for dinner. On her way out though, I was standing in the hall talking to a friend. As she walked by, she reached out and squeezed my left shoulder.

“Good luck!” she said and smiled.

I smiled too, and then turned back to my friend. “We both went to Wellesley,” I explained. Thirty-six years between us, but still one and the same. After all, both 1974 and 2010 were purple classes.