Tonight I was going through my bedroom closet a little bit––hoping that if I start spring cleaning then it will actually, finally, officially, forever stop snowing––and I started to make a pile of my various bags because, man, do I love a good bag––vintage leather purses, hipster backpacks, glittery clutches, etc. And as I piled, I began to notice something. Of my collection of bags, not only do I have a disproportionately high number of tote bags in general (I have at least three Fishers Island Library totes, along with the classic WZLY 91.5FM “Bitches Love Totebags” tote bag, and one from Third Man Records in Nashville, just to name a few), but most of my tote bags come from bookstores. Specifically: bookstores of the independent variety. 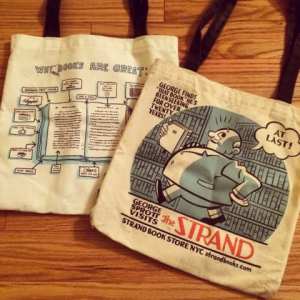 Part One: The Strand Edition.

Anyone who loves books and has ever been even near New York City has been to The Strand. I first went to The Strand when I was in sixth grade and my dad was working in Manhattan; it was the end of the 1990s and then The Strand boasted having eight miles of books. Now it has eighteen.

Please note here that I actually used to have more tote bags from The Strand, but when moving this past summer I tried to streamline things a bit and limited myself to keeping only a couple. That’s a joke though––you know the next time I go back to New York I am going to buy another one. 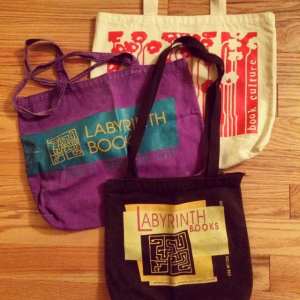 In my defense, I did spend two years at Columbia University for grad school, and Book Culture is the official bookstore of the MFA Writing Program. However, two of these bags are from back when Book Culture was called Labyrinth Books, purchased while visiting one of my high school best friends who was a first-year at Barnard. So, I have no real excuses here. 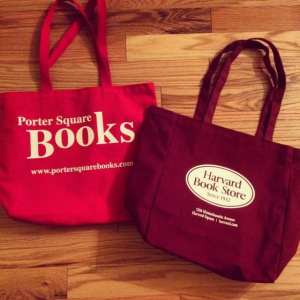 Growing up in the Greater Boston Area, north of the Charles River, I always had a crush on Cambridge and its many cool independent bookstores. It is my great honor and pleasure that I now live within walking distance of both Porter Square Books and the Harvard Book Store. Gotta love that (Harvard) crimson. 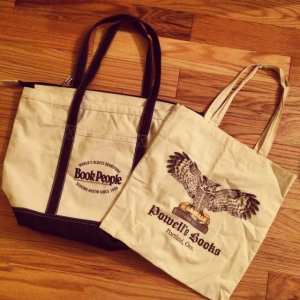 Both of these gems were bought on trips to regions outside of the Boston/New York area. Powell’s Books in Portland, Oregon is legendary, so obviously I had to commemorate my trip there, and Book People in Austin, Texas is magical. One of my worst home-after-traveling regrets is having not purchased a tote bag from a bookstore that I visited. Why didn’t I get one from the Elliott Bay Book Company in Seattle, Washington or McKay’s in Nashville, Tennessee? What was I thinking?! 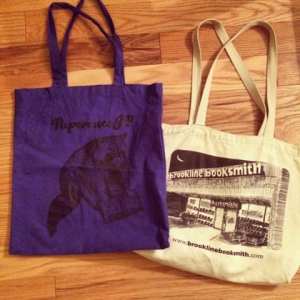 I’ve spent many an hour and many a dollar at the Brookline Booksmith, especially during my years living in Dorchester and hanging out at Coolidge Corner. However, confession, I have yet to go to the new Jamaica Plain bookstore Papercuts JP. Both of these tote bags were presents from two of my BFFs: H. Tucker Rosebrock and Elizabeth Jane Good. Thanks for encouraging my habit, people. 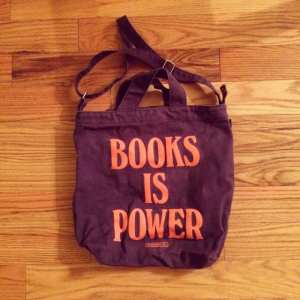 Don’t forget about Printed Matter, Inc. in New York! While not a traditional bookstore in the sense that it doesn’t sell copies of Yes Please by Amy Poehler, you can’t get much more independent than a bookstore selling zines, chapbooks, and artist books. Their tote bags are works of art themselves.

I’ve decided it’s probably less weird if I just accept that this is a “collection” and not an “intense subconscious hoarding situation.” So, in that case, let me ask all of you: What are your favorite bookstores that I absolutely must visit one day, and, from which, purchase a tote bag?