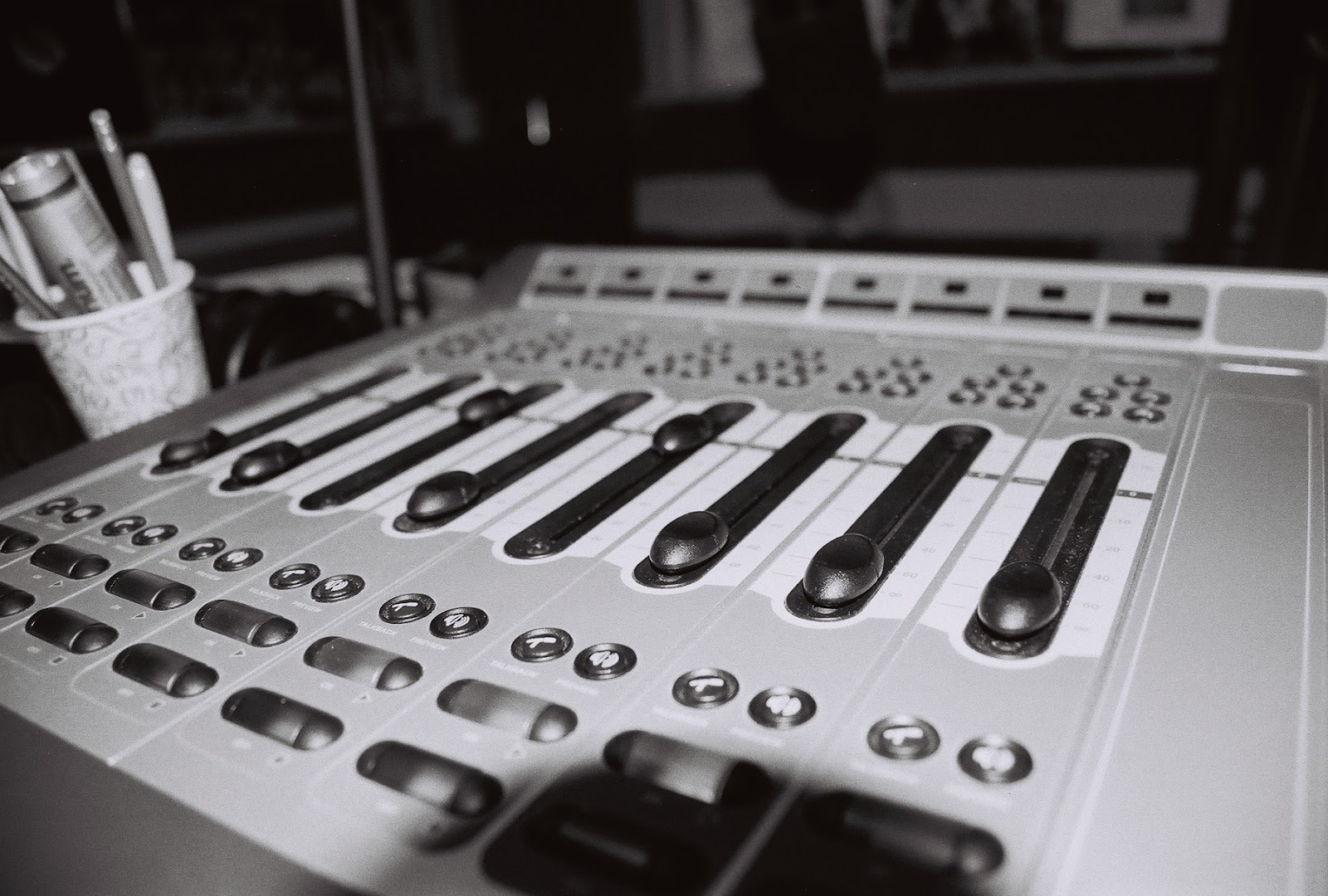 I never thought about radio until I met you.

I listened to it, sure. When I was a kid, my mom and I would have sing-alongs to ‘80s pop hits on Mix 98.5 FM; in middle school, my friends and I would blast Kiss 108 FM or Jamin’ 94.5 FM to hear the latest Backstreet Boys or Nelly hits; and in high school, I would turn my car radio to Emerson College’s WERS 88.9 FM, to listen to indie music and feel cool. But I never thought much about how the radio played the songs that it did. I grew up listening to Garrison Keillor’s Prairie Home Companion with my grandparents in the car, laughing to stories about Lake Woebegone, realizing that Garrison Keillor was a real person, who wrote these stories and performed them for the airwaves, but when it came to most radio stations, I didn’t think about the people sitting behind the dials, picking out the next song, adjusting the volume, timing the transitions, and avoiding dead air. 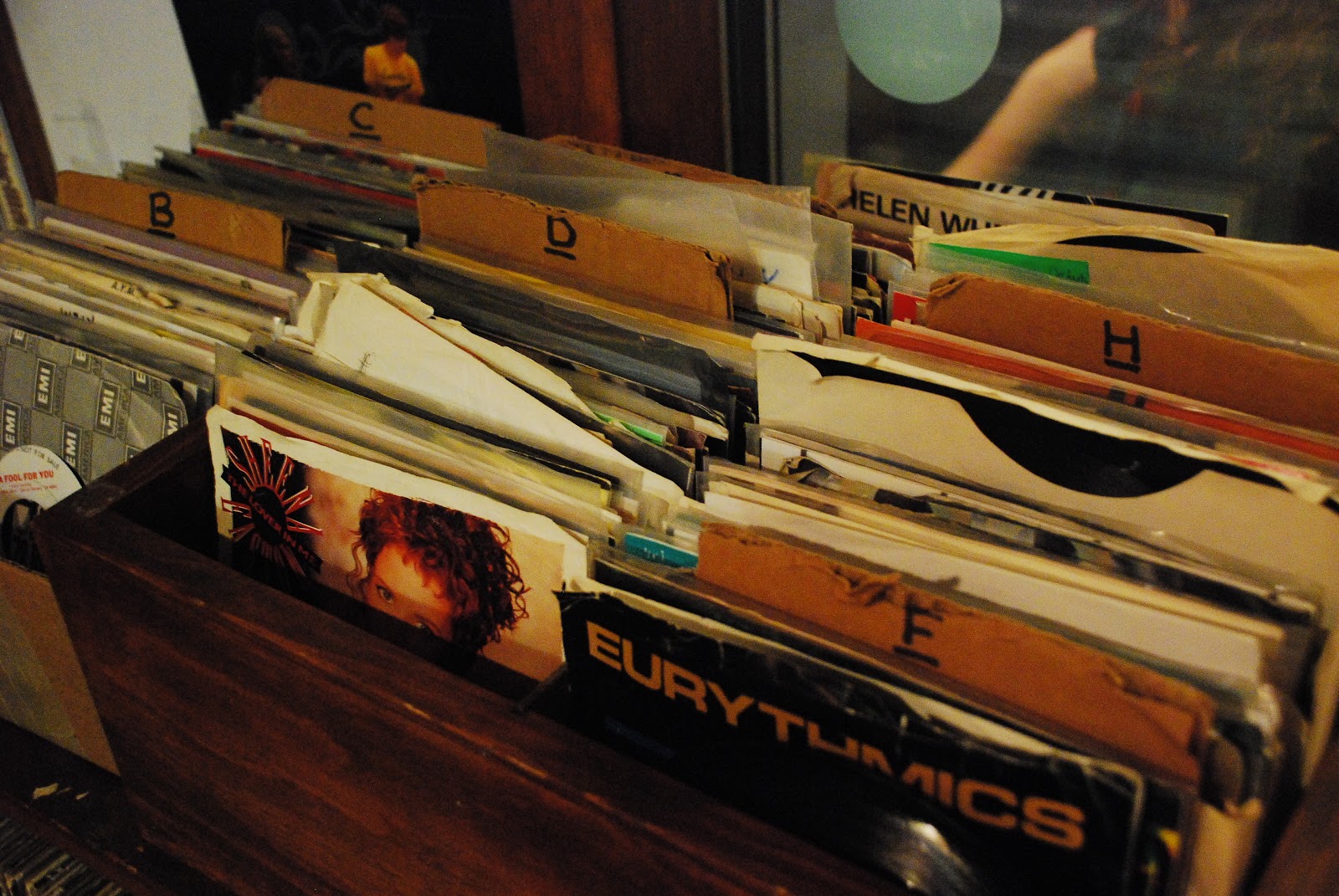 When I got to Wellesley, I was overwhelmed by all the possible extracurricular activities. I love extracurriculars, and always have; I am prone to signing up for too many things. In high school I did a lot of theatre, was part of Amnesty International and the Environmental Action Committee, and was the editor-in-chief of the literary arts magazine, so, when I first arrived on campus, I began to look for familiarly themed activities. I became a recycling rep for Claflin Hall almost immediately; I signed up to take a theatre class my first semester. But as I was thinking of what else to do, I got a life-changing suggestion.

I was on a bus––some part of First-Year Orientation––sitting near one of the First-Year Mentors. The senior asked me what clubs I wanted to check out at Fall Fling, and I expressed my many and overwhelming interests.

“Well,” said Ashira Greene ’07, to whom I will be forever grateful, “have you ever thought radio? You should check out WZLY. It’s pretty awesome.” 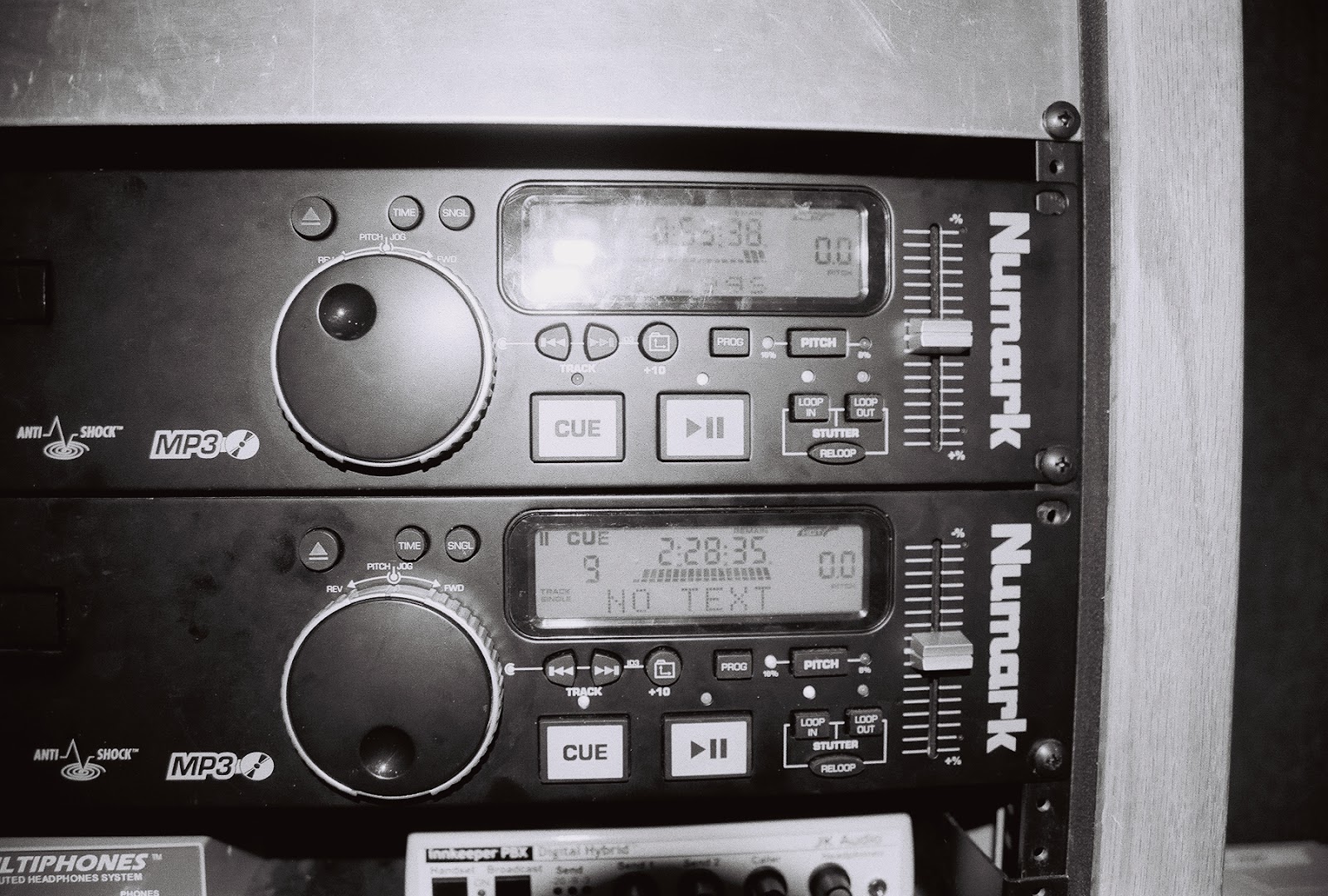 I became involved with the station my very first semester, interning with Courtney Campbell ’07. By spring 2007, I had my own themed show––Soundtrack System, where I only played songs featured in the soundtracks of movies and television shows. 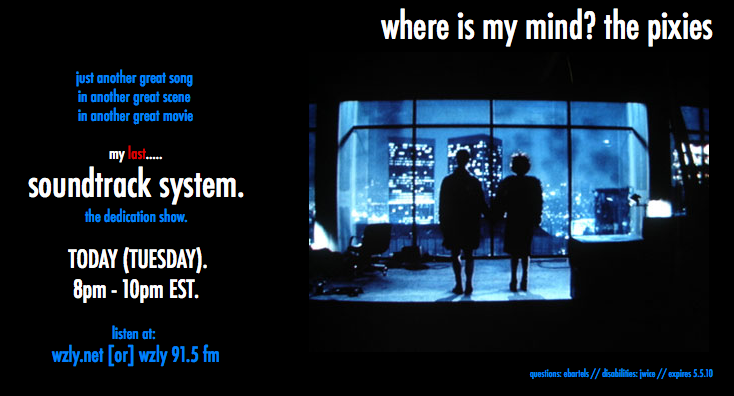 By fall 2007, I held the position of Record Librarian on WZLY’s Executive Board, and by fall 2009, when I returned from studying abroad, I was the Publicity Director, co-planning concerts with the Promotions Director (a.k.a. my BFF Ami Li ’10; together we formed the “Promicity” committee), designing merchandise (those black V-neck t-shirts with the shakily drawn WZLY 91.5 FM Electric Ladyland logo, the infamous BITCHES LOVE TOTEBAGS totebags, the key-shaped WZLY bottle openers), littering the campus with fliers for Jukebox the Ghost, Toro Y Moi, Thao & The Get Down Stay Down, sliding broadcasting schedules under dorm room doors, throwing glam rock-themed parties in Lake House, and having the time of my goddamn life. 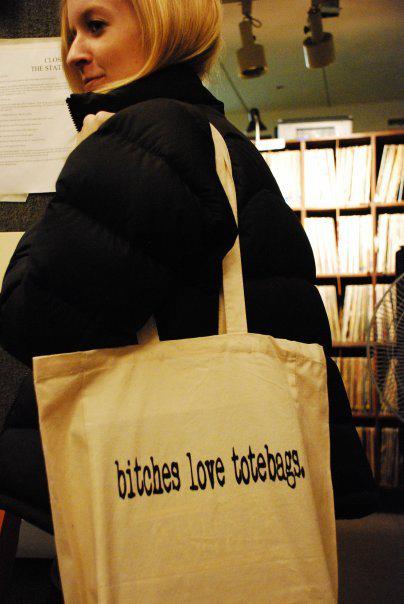 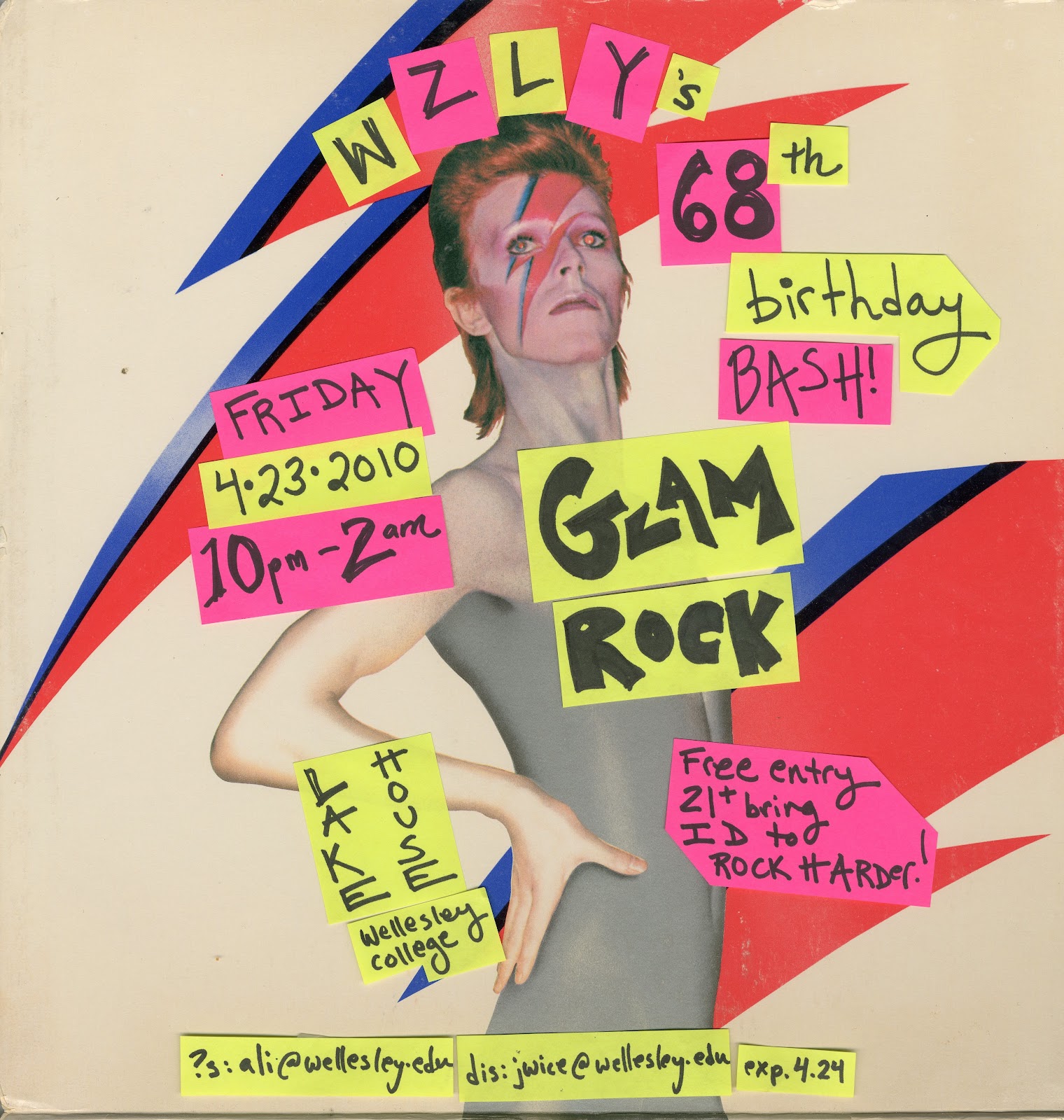 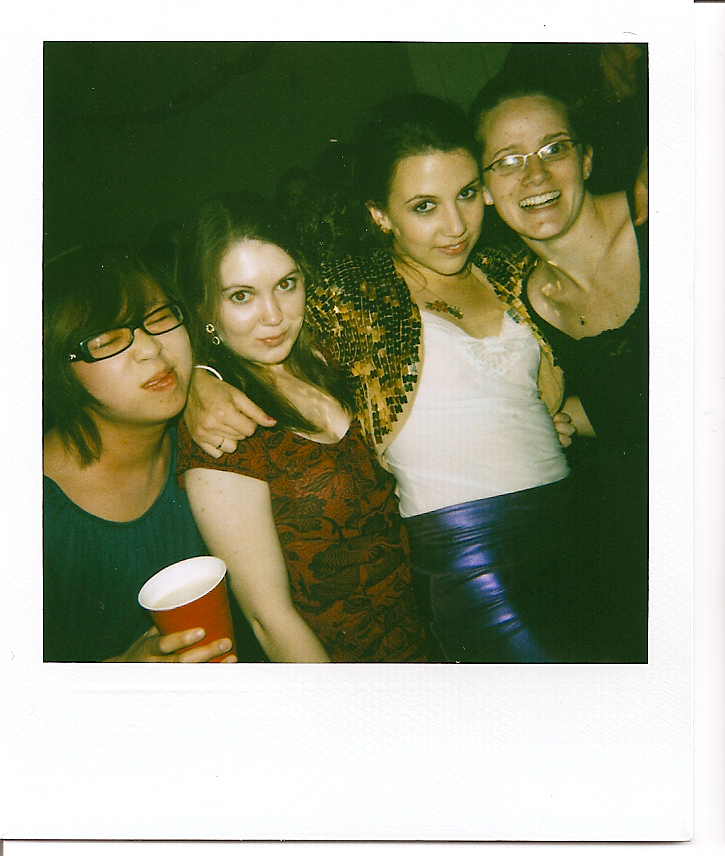 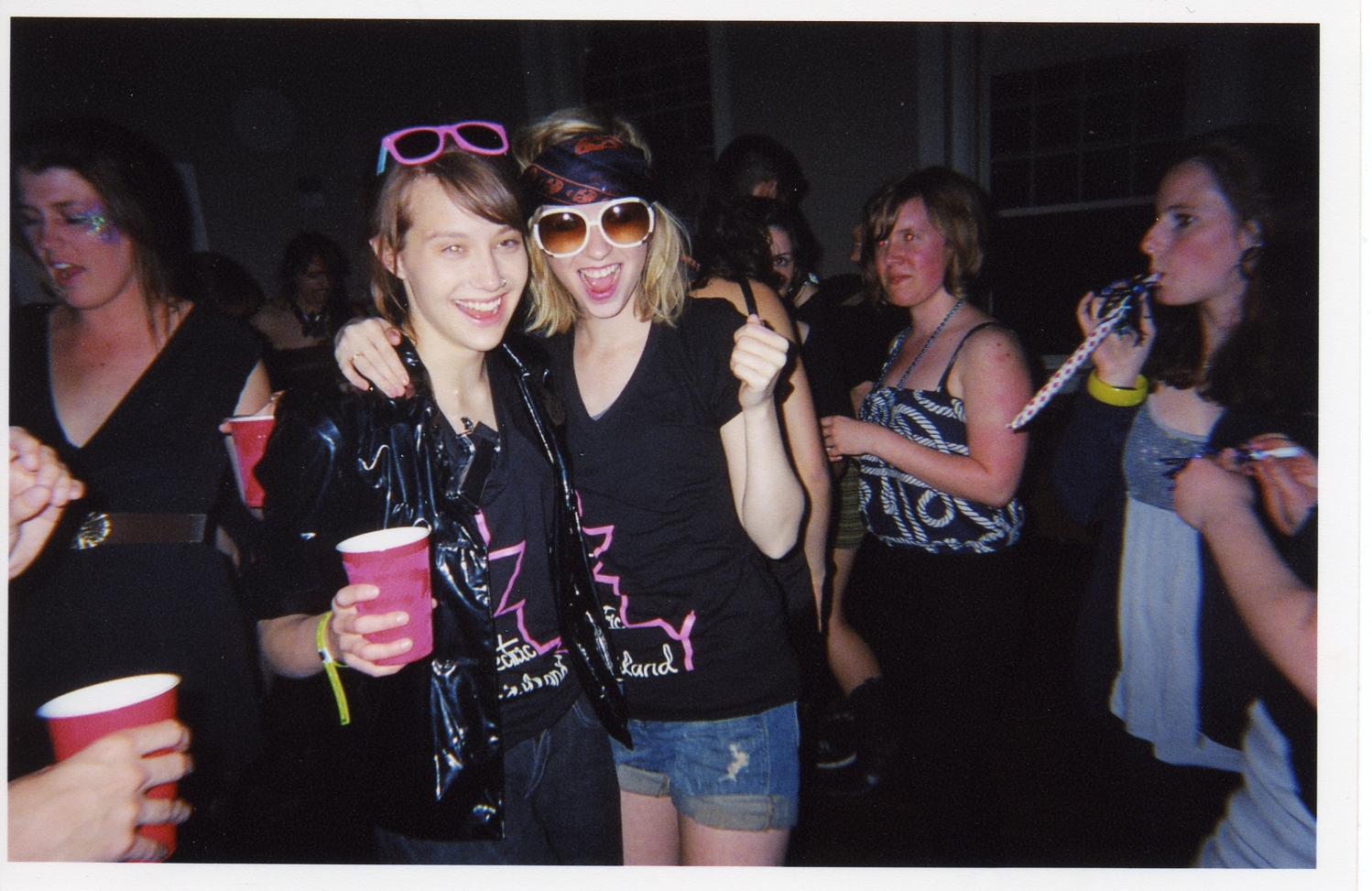 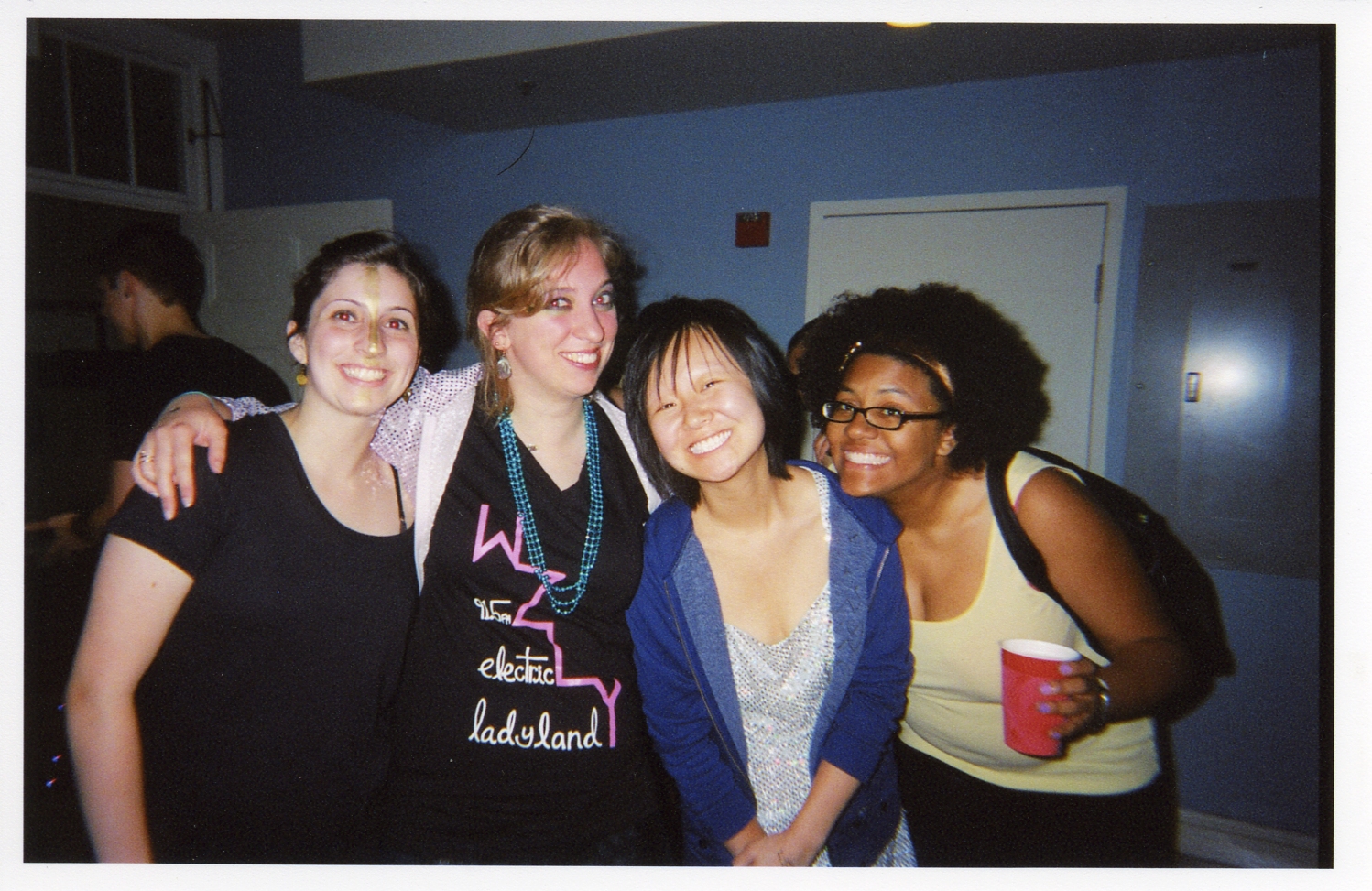 But rewind, reset the record needle, how did this all happen?

First, I fell in love with your space. I entered during the fall open house, when the already-established DJs attempt to lure newbies into the cult of radio. Finding you at first wasn’t easy, with the radio station being located in the basement of the mostly abandoned, slowly decaying Schneider Hall. I heard stories of the building’s heyday: the bustling original Café Hoop, student government buzzing in offices upstairs, people sprawling on sofas, hanging out, talking, radio DJs and non-WZLY members alike flowing in and out of the radio station lounge. But by fall 2006, the Lulu Chow Wang Campus Center was in full force, and Schneider had been reduced to phantoms, except for you, still plugging away in its basement. While the older DJs spoke with longing for the old Schneider, I liked this version. I liked that to find you, WZLY, you had to enter through a seemingly-broken door, descend into the dark, wobble on the sagging rotting stairs, pee in a frightening basement bathroom (which was most definitely haunted––an EBoard member once saw a ghost in there during a meeting), all in order to find the warm, glowing pulse of the radio station where, day or night, you could always find a friend. It was like a secret clubhouse, and, becoming part of it, I felt cooler than I ever had in all my high school years of Amnesty and the lit mag. 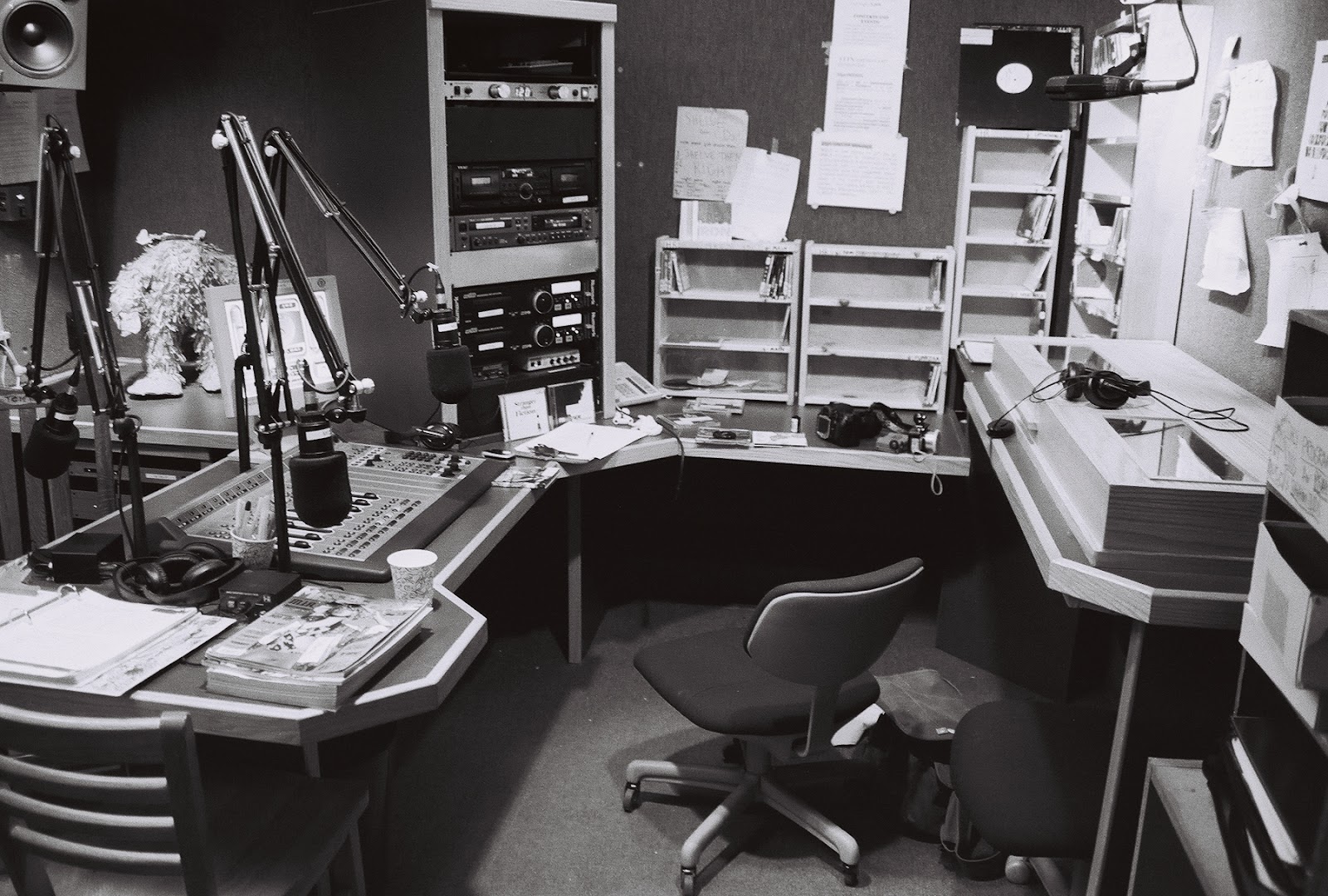 I felt cool being part of you, WZLY, but what is feeling cool really except feeling comfortable in a place? Even more than Claflin Hall, where I lived for all three of the years I was at Wellesley, the radio station itself became my home on campus. That bright little patch in the heart of a dark, decaying building, full of old nasty sofas and a billion CDs and records and the graffiti of DJs past. I spent hours reading the names on the walls, studying the old posters, leaving my own legacy in Sharpie. I pulled all-nighters writing essays on the torn, plaid sofas. I shot-gunned beers in the sketchy stairwell outside the station. The radio station was the first place I brought non-Wellesley friends visiting campus. 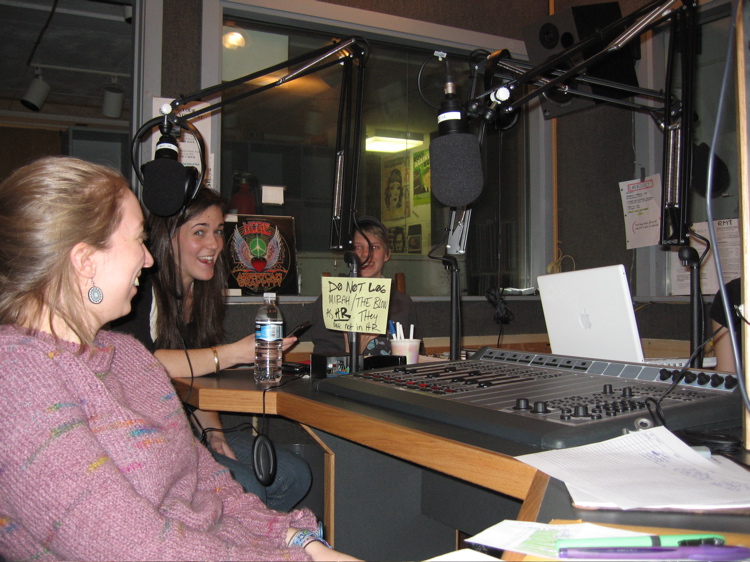 Even my family’s dog, Gwen, got a tour of your station. It was my home more than any dorm room. 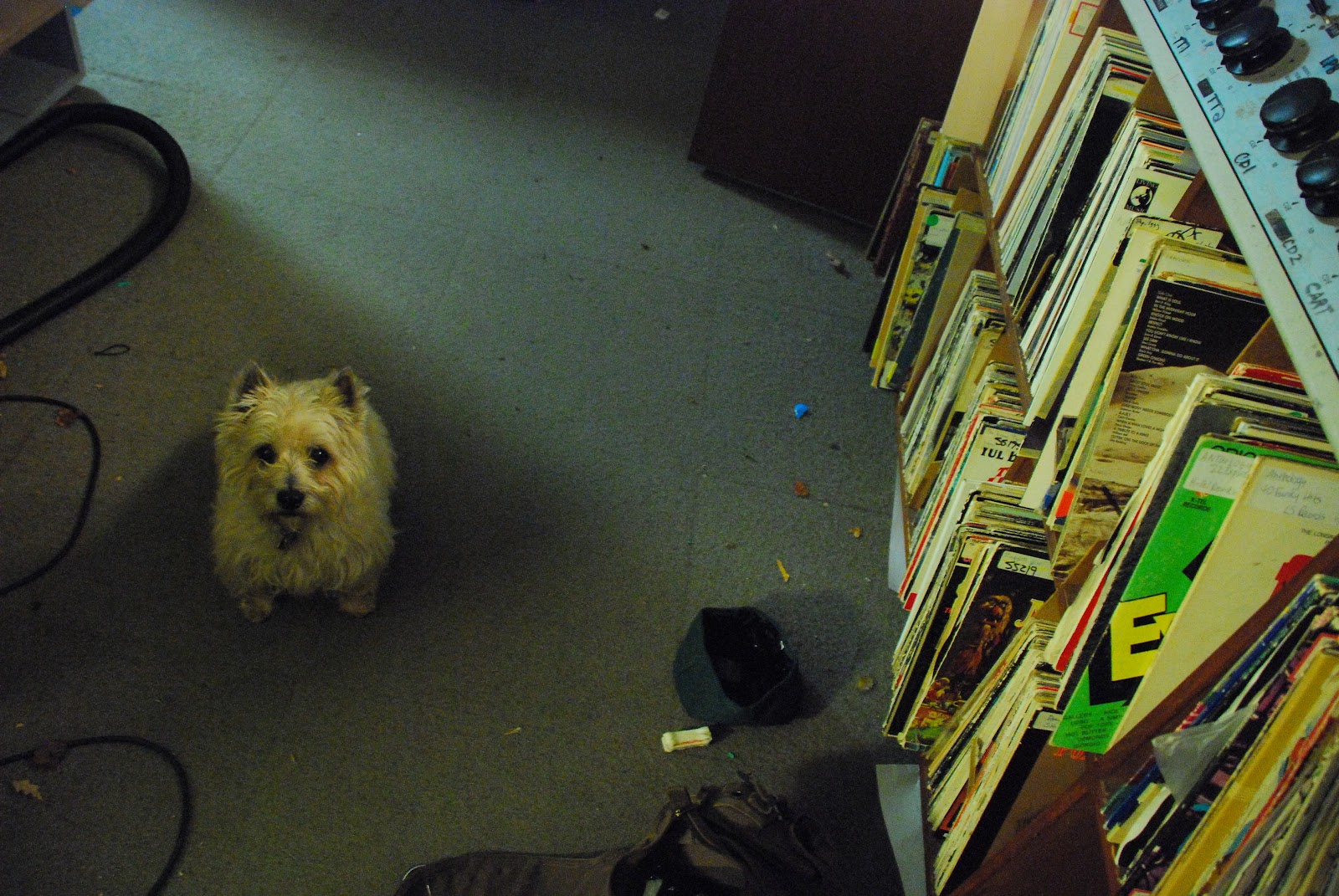 But radio is about more than just a cool-looking station filled with the favorite song lyrics and signatures of hipster DJs. Radio is about communication, and connecting people by beaming out one broadcast signal and reaching as many ears as possible. That’s how you started, back when you were WBS 730 AM, on April 20, 1942. You, WZLY, were about getting women’s voices heard; you were the very first all-women college radio station.

My first year, your webcasting always seemed to be broken, and so my mom, who lived a half hour away in Lexington, would go grocery shopping at the Wellesley Stop and Shop, timing her errand so she could sit in her car in the parking lot and listen to part of my show. The thrill of that first time I spoke, “For requests, call 781-283-2960,” and a person actually called––even if that person was just my enthusiast mother––I knew someone was listening. Someone heard me. It felt like magic, speaking into that microphone, fading out a song, queuing up the next one, into ears across the world (or at least the town of Wellesley).

When webcasting was fixed, my grandfather would play my show on a computer at his insurance office in Somerville, and call in to request songs from the Goodfellas soundtrack. And when I spent the entirety of my junior year away from Wellesley and webcasting you, my beloved WZLY, made me feel not so far away in snowy, dark St. Petersburg. I would wake up extra-early to listen to my friends’ late-night shows, using Skype to call the station phone to make requests.

Because it was the friends I made through you, WZLY, that made it all worth it. I could always count on someone to show up during Soundtrack System to banter with me on air and keep me company. I actively looked forward to EBoard meetings on Sunday nights––an excuse to lounge around the station and catch up on the week with the individuals who would become my best friends at Wellesley. One rainy, dark, winter day, after getting dumped by my then-boyfriend, H. Tucker Rosebrock ’10 entered the studio to find me slumped and playing the Gary Jules “Mad World” cover from Donnie Darko. He shook his head, offered me a cookie, and then requested something lighter. By the end of the two hours, I felt better. Even the few friends I had who were not WZLY DJs loved to hang out at the station and sit in on my show (Virginia Cary Ritter ’10, Lee Hanae Ung ’10, and Ali Barthwell ‘10 were among the most loyal). 91.5 FM tied us all together.

And you, yourself, WZLY, you became a friend too. The days I had my radio show to myself––sitting alone in the studio, busy enough queuing up tracks that I couldn’t try to multitask and also do homework, but idle enough that I got a chance to just sit, think, and listen to music––I was the most content and happy I ever was in college. I never felt alone or lonely in the station. (Though maybe it was just the presence of that Schneider bathroom ghost.) 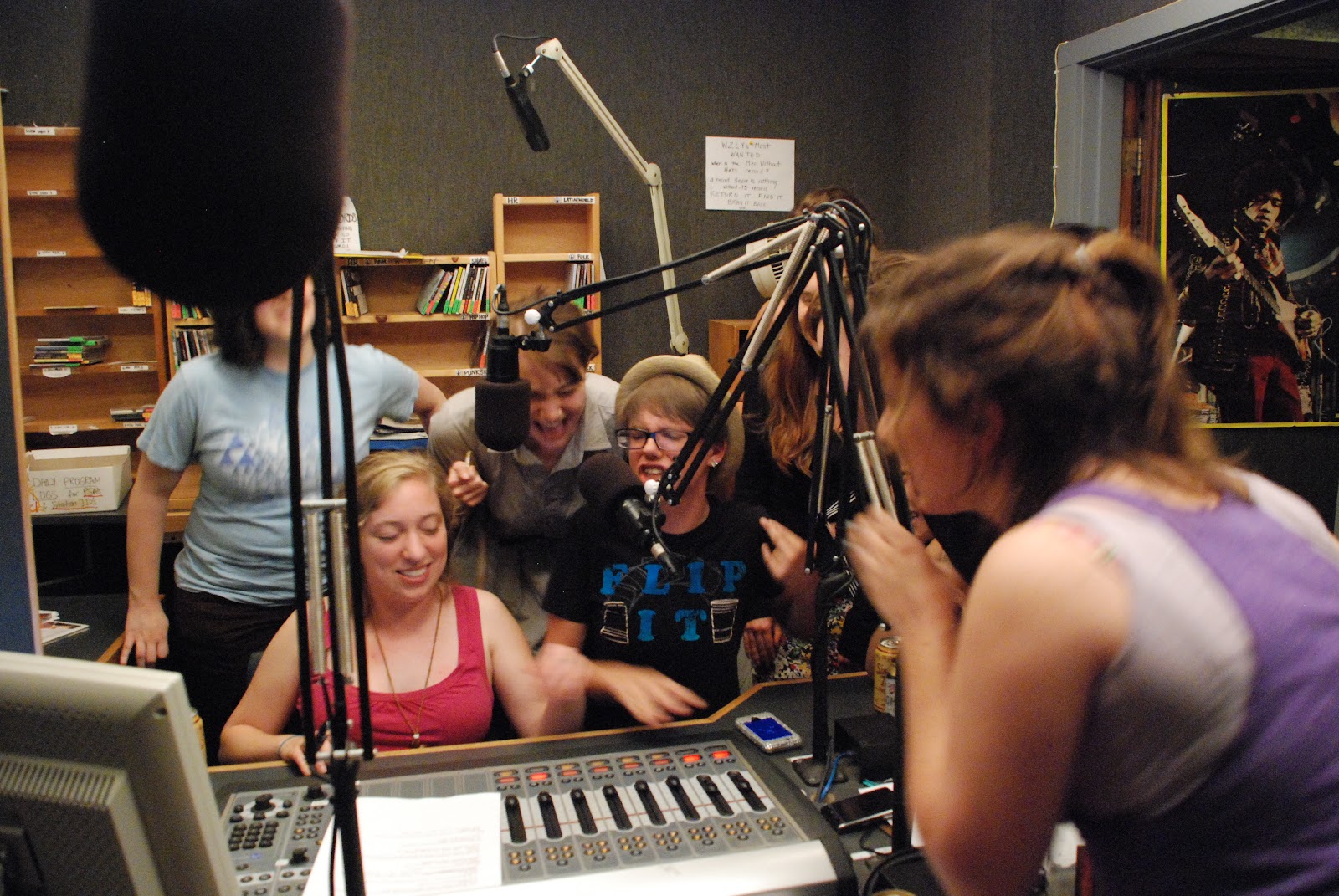 You were my community. Other Wellesley students had TZE or ZA, The Hoop or El Table, Blue Notes or Tupelos, Shakes or Upstage, but my society, co-op, music group, production, was WZLY.

Even now, as an alum, I remain loyal to you. The little money I can donate to Wellesley, I try to earmark in your name. I continue to buy Electric Ladyland merch, as I have a soft spot for each new Publicity Director who has succeeded me, and I am impressed by how much they have stepped up their sweatshirt game. (Also, those DJ pins they made are flawless.) I continue to be proud and a little embarrassed by the number of times I found myself wearing more than one of your items at a time: a vintage WZLY t-shirt under my Varsity Radio sweatshirt with my Bitches Love Totebags totebag on my shoulder. When I crashed 2009’s Five Year Reunion this past spring, of course I was part of a group who “broke into” the radio station––which had been left generously unlocked by understanding current DJs. My heart swelled when I saw my old messages scratched into the white cement bricks, found old posters I had designed tacked up, and I smiled when I saw that a note I had sent a recent Publicity Director after buying a new sweatshirt had been taped on the wall near the ceiling. 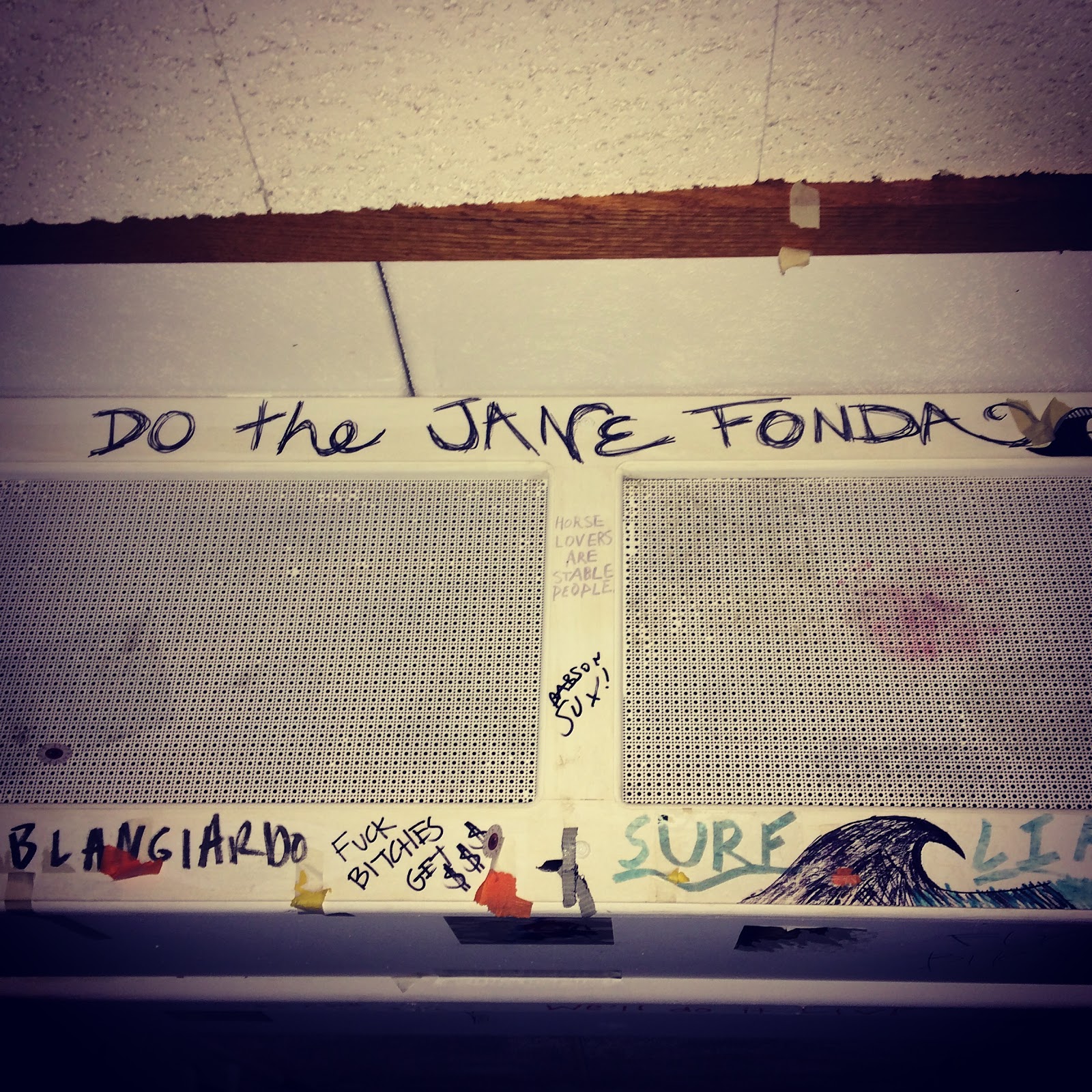 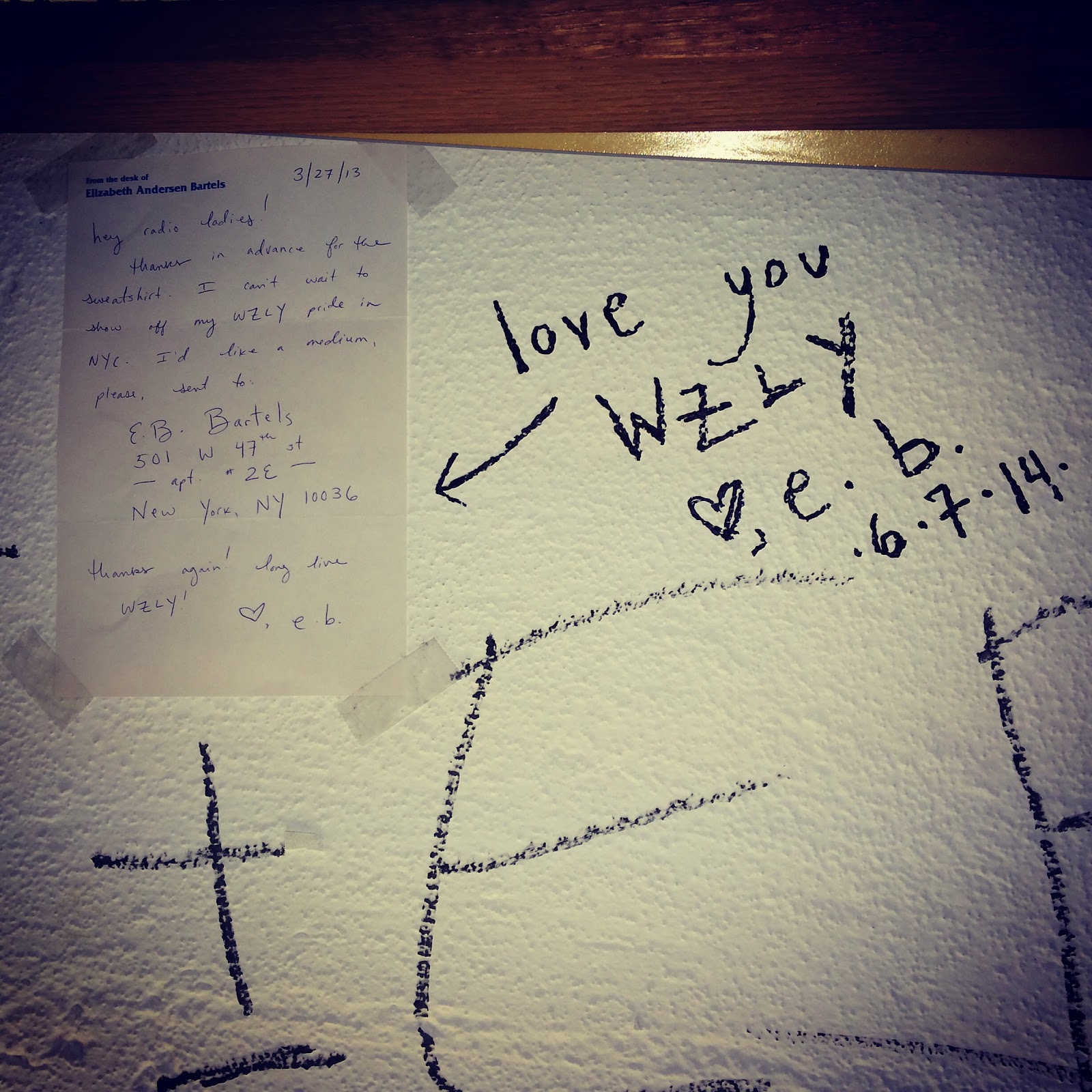 It’s been years since I last spoke on air, but I still panic with each new threat to your existence. How dare anyone threaten to remove you from your cozy, historic, probably-definitely-not-up-to-code location in the basement of Schneider! I was devastated when I heard the news that the current EBoard decided to sell your 91.5 FM frequency. While my heart hurts that the 91.5 FM era is over, I hope that you will never change in your sense of place, community, and connection.

Plus, I guess, with the FCC out of the way, you can finally be completely wild and free (though we never let the FCC ruin our fun before).

And so I leave you, WZLY, with those seven famous words. 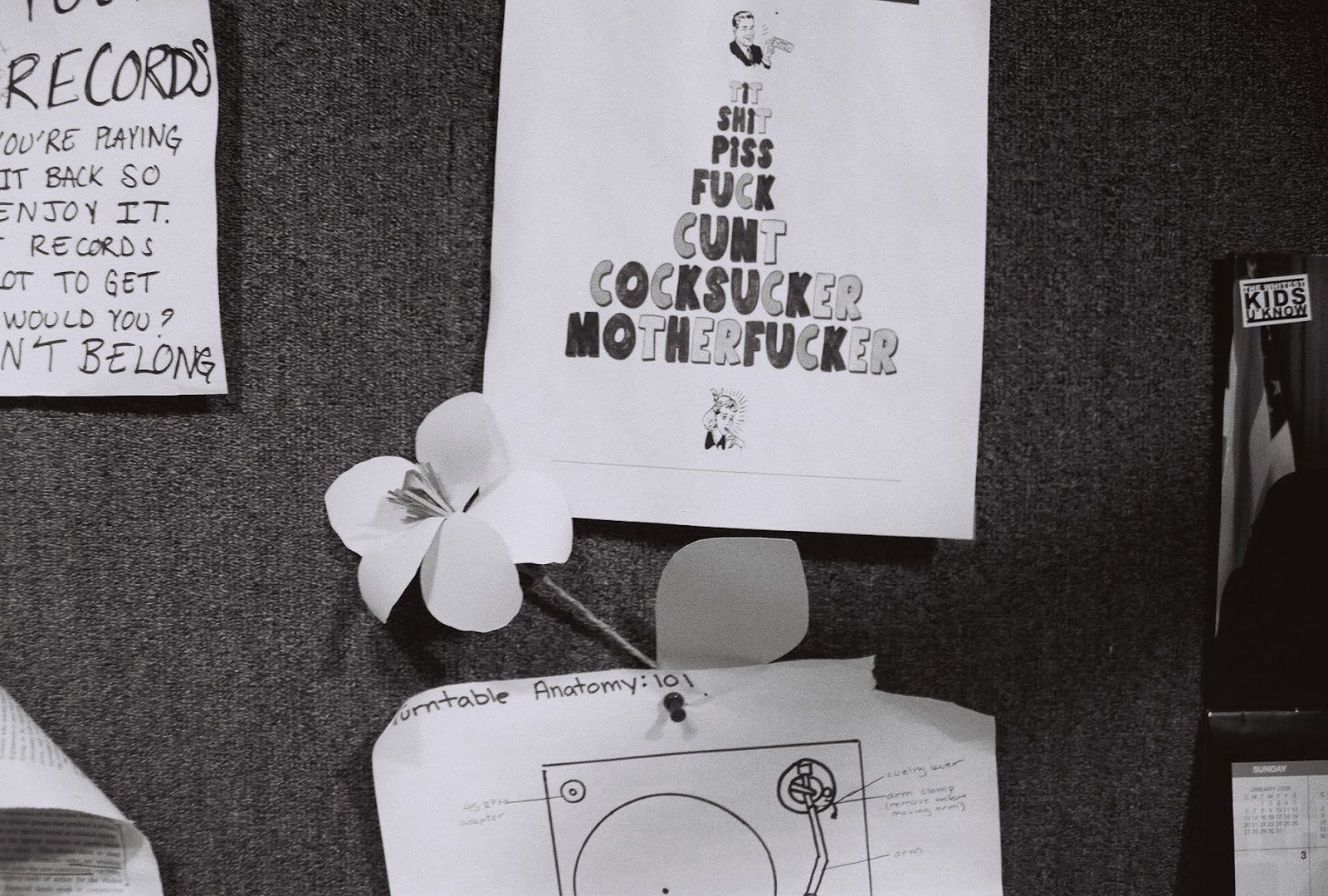 All images courtesy of E.B. Bartels.