For the full interview, see it on Fiction Advocate.
Originally published on April 28, 2015. 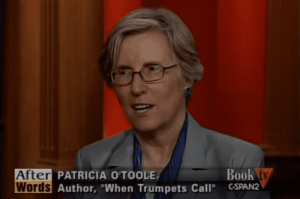 In the first of her series of interviews with women who write nonfiction, E.B. Bartels speaks with acclaimed biographer Patricia O’Toole.

Patricia O’Toole is the author of When Trumpets Call: Theodore Roosevelt after the White House, Money and Morals in America: A History, and The Five of Hearts: An Intimate Portrait of Henry Adams and His Friends, which was a finalist for the Pulitzer Prize, a National Critics Circle Award, and the Los Angeles Times Book Prize. O’Toole teaches in the Writing Program at Columbia University and is a fellow of the Society of American Historians.