For the full interview, see it on Fiction Advocate.
Originally published on September 14, 2015. 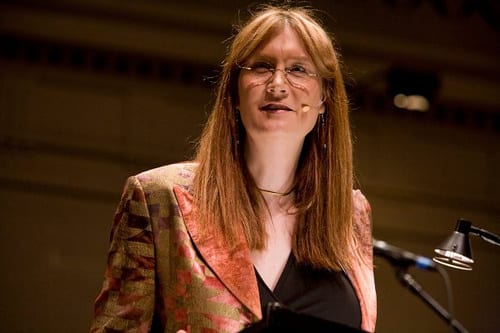 In the sixth of her series of interviews with women who write nonfiction, E.B. Bartels speaks with bestselling memoirist and opinion writer Jennifer Finney Boylan.

Jennifer Finney Boylan’s memoir, She’s Not There: a Life in Two Genders(Broadway/Doubleday 2003) was the first bestselling work by a transgender American. A novelist, memoirist, short story writer, and an advocate for civil rights, she is the author of thirteen books. Boylan also has been a contributor to the op/ed page of The New York Times since 2007; in 2013 she became Contributing Opinion Writer for the page. She serves as the national co-chair of the Board of Directors of GLAAD, the media advocacy group for LGBT people worldwide, and serves on the Board of Trustees of the Kinsey Institute for Research on Sex, Gender, and Reproduction. Boylan is the inaugural Anna Quindlen Writer in Residence at Barnard College of Columbia University.