For the full interview, see it on Fiction Advocate.
Originally published on July 13, 2015. 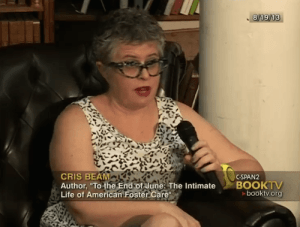 In the fourth of her series of interviews with women who write nonfiction, E.B. Bartels speaks with Cris Beam.

Cris Beam has written two books of nonfiction–Transparent: Love, Family, and Living the T with Transgender Teenagers (Harcourt, 2007) and To the End of June: The Intimate Life of American Foster Care (Houghton Mifflin-Harcourt, 2013)–and a young adult novel, I Am J (Little, Brown, 2011). Her books have received many awards, including a Lambda Literary award and a Stonewall Honor for Transparent, and a Kirkus and American Library Association Best Book honor and a Junior Library Guild Selection for I Am J. Additionally, Beam’s work has appeared in The New York Times, The Atavist, The Huffington Post, The Awl, Out, and on This American Life, among others. She teaches writing at Columbia University and New York University.