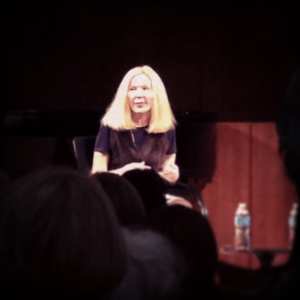 Katherine Boo at the Brooklyn Public Library on Sunday, April 13, 2014.

Sometimes it seems that I have spent most of my MFA in nonfiction listening to professors and students alike rave about Behind the Beautiful Forevers by Katherine Boo. While I have yet to read her acclaimed narrative nonfiction account of Annawadi, a makeshift settlement in Mumbai, I have heard only the highest of praise for her book. Ms. Boo has achieved rock star status in the nonfiction mafia, and after hearing her speak at the Brooklyn Public Library this past Sunday – in conversation with Amy Waldman, author of The Submission – I am now a groupie as well. Here are a few of the great points Ms. Boo made on Sunday about writing nonfiction: