For the full essay, see it on The Toast.
Originally published on September 24, 2014. 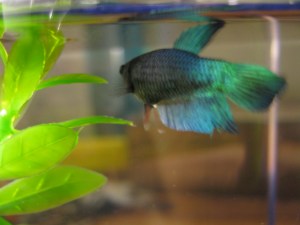 My two roommates appeared by my side, our faces almost touching as we peered into the tank, so close our breath fogged the plastic. The three of us peered into the one-gallon tank on my dresser, full of neon pink rocks, a fake plant, a gray plastic castle, and a purple-maroon Betta, our beloved Wanda, the mascot of Claflin Hall, room 107, who was not doing well.

Wanda floated in her tank, barely bothering to swish her fins, ignoring the flakes of food I sprinkled on the surface above her enlarged head. Her scales – normally a bright, shiny metallic purple – were muted and protruding, no longer lying flat against her skin.

Leigh, on the premed track, turned to her computer. After a few minutes of research, she had the diagnosis: