For the full essay, see it on The Rumpus.
Originally published on June 2, 2014. 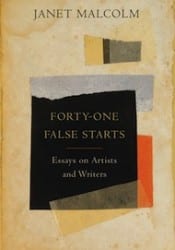 Janet Malcolm’s latest book, a collection of her essays on artists and writers, is titled Forty-One False Starts after the opening profile on the artist David Salle. Malcolm mimics Salle’s collages and conglomerate paintings in her own writing – “a kind of parody of his melancholy art of fragments, quotations, absences – an art that refuses to be any one thing or to find any one thing more interesting, beautiful, or sobering than another” – by juxtaposing forty-one different ways she could have started the profile piece. Opening with this unusually structured essay prepares the reader from the start: this is no ordinary journalism. This is Janet Malcolm.