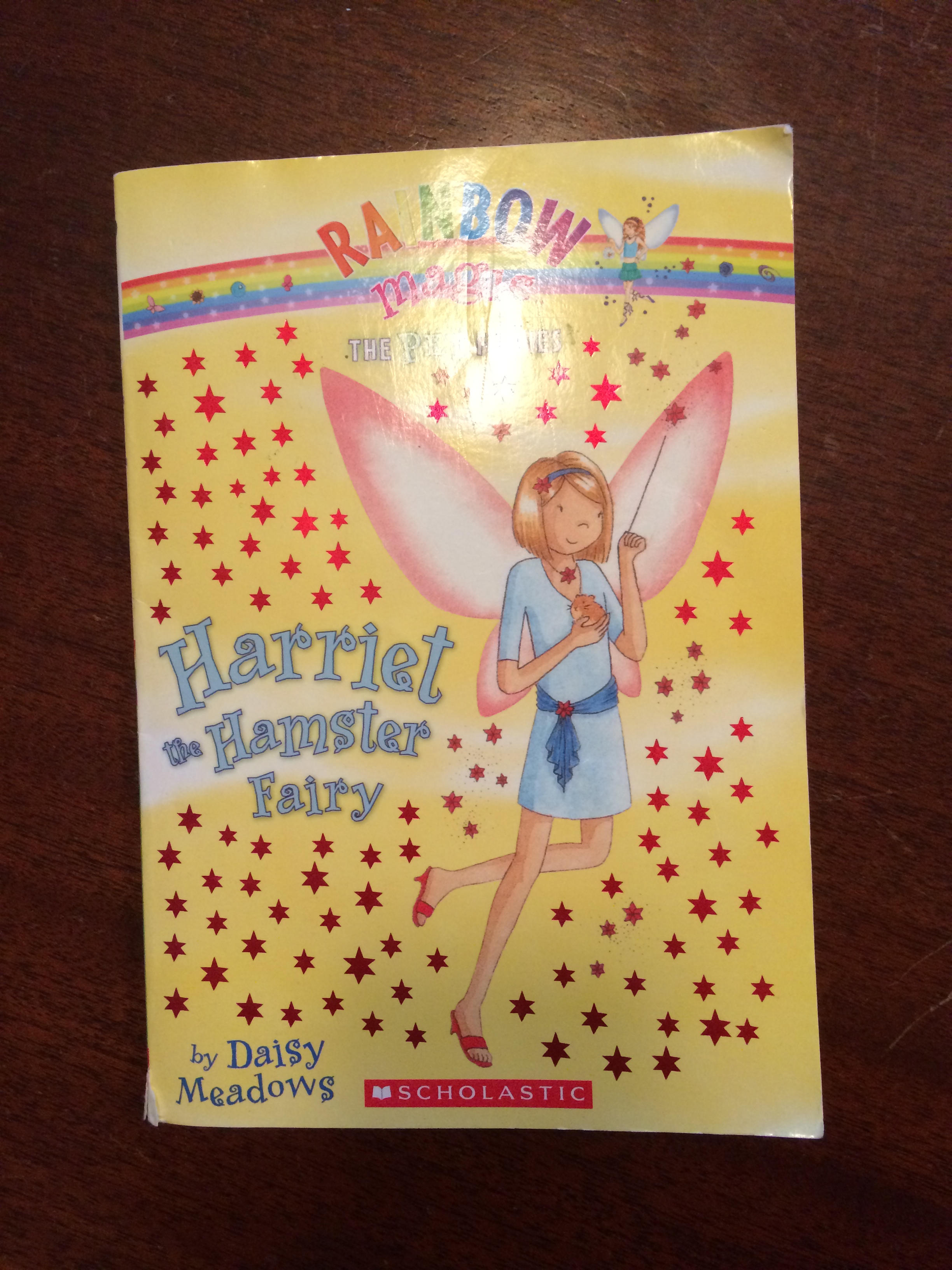 I have been forced, because the Babysitting Charge demands it, to read the book Harriet the Hamster Fairy out loud, every afternoon, while the Charge eats her snack, for the better part of a week, and let me just say, Harriet, it’s time to get your shit together.

This hamster fairy book – I mean, first let’s just pause and think about that phrase, hamster fairy – is part of a series called, appropriately, Pet Fairies. The concept is that in the fairy world, owners don’t choose their pets, the pets choose their owners, and so each fairy in the series – there are seven, which is way too many in my opinion – has been magically chosen by a special animal. So everyone in the fairyland has an animal except poor mean old Jack Frost. All he wants is a pet of his own, but the fairy pets are snobs and only want to be owned by fairies, and so instead of resigning to a pet-less existence and getting really into pruning bonsai trees, he kidnaps – sorry, petnaps – all of the animals. But, luckily, the pets escape into the human world and protagonist Kirsty Tate and her BFF Rachel Walker must help the pet fairies rescue their pets before Jack Frost has his nasty old green goblins get to the fairy pets first. Got it? It’s ok, I don’t get it either. I mean, why does Jack Frost have goblins? Is that a thing? Also, isn’t being a fairy hard enough without having to worry about taking care a pet? I mean, come on, one of the pet fairies has a pet horse. Don’t fairies fly? Why would she need to ride a horse? Let alone the fact that I can’t wrap my head around the fairy vs. human world space/time dimensions, but that seems more of a problem for an astro-physicist than for me, your local babysitter.

So, here we are, the Charge eating peanut butter off a spoon, and me reading Harriet the Hamster Fairy and wondering who the hell writes this stuff. The author of this series is named Daisy Meadows, which is the pen name for a series of ghostwriters who I can only assume are too ashamed to have their real names associated with the Pet Fairies series. But couldn’t they have picked a better name? Daisy Meadows sounds like someone was raised on a commune in California or moonlights as a stripper. Also, a note to the publisher: are you really using Curlz MT for all the chapter titles? Isn’t it 2014? Shouldn’t we have moved on by now? 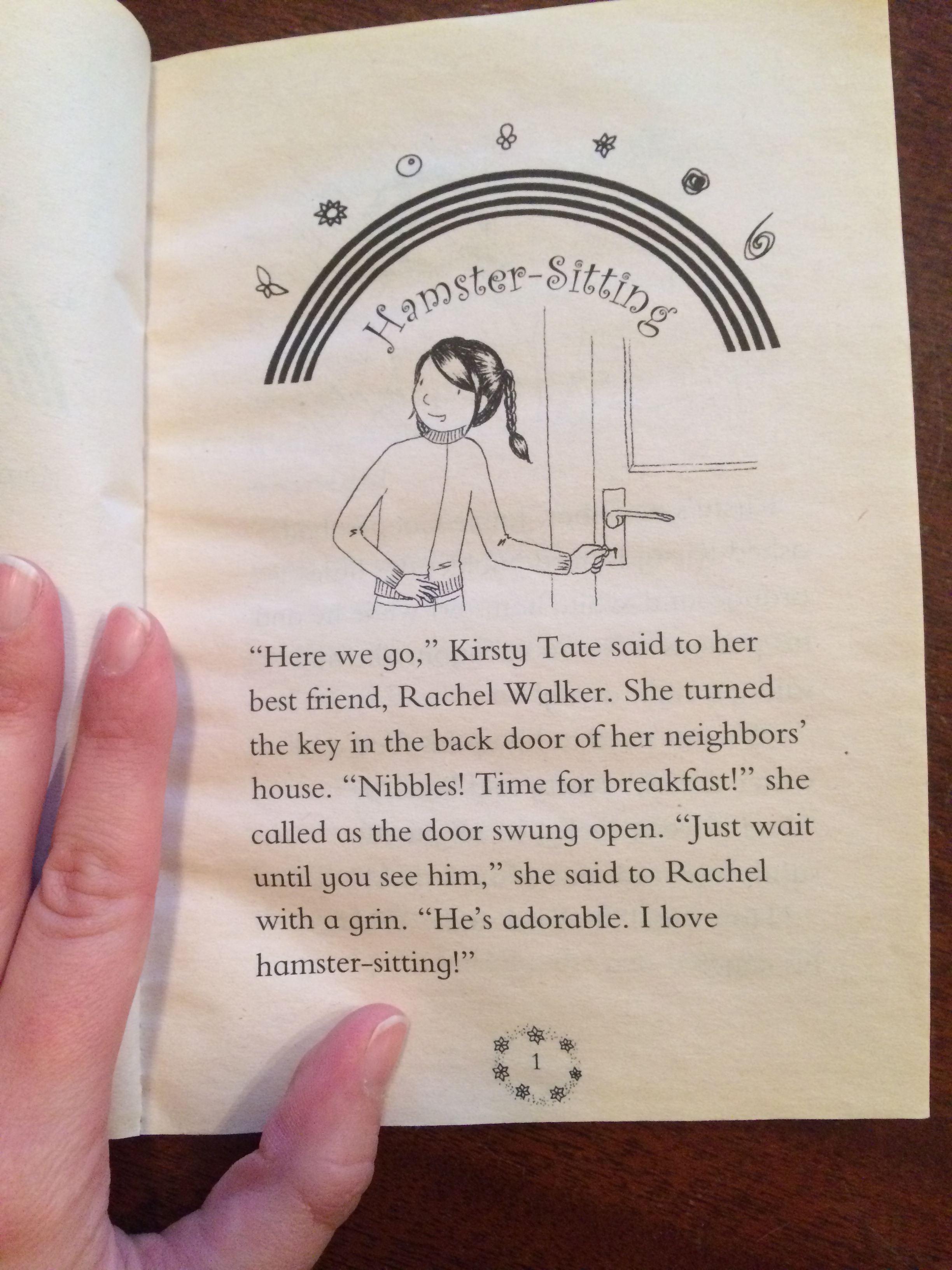 Diving into the plot: it’s weak. The action takes place all in one busy morning, when Kirsty and Rachel go over to their buddy Jamie’s house to feed his pet hamster, Nibbles, while Jamie is out of town on some boring mandatory family vacation. Naturally, when they arrive, the hamster cage is open, Nibbles is nowhere to be found, and they must go on a mission to locate him. They encounter some of Jack Frost’s goblins along the way and find out they – those assholes – let Nibbles loose to lure the fairy hamster to rescue him, and, lo and behold, the fairy hamster shows up and like an idiot she gets captured by the goblins, and then Harriet shows up and is all like come on what the hell give me back my hamster, but, of course, spoiler alert, Kirsty and Rachel find the fairy hamster and get her back to Harriet no problem and then also find Nibbles because what’s easier than finding one hamster but finding two. Yeah, how many times does that happen in real life? What usually happens to hamsters when they escape? They get eaten by the cat or trapped inside a pipe in a wall or vacuumed up by an unsuspecting but well-meaning parent. As soon as Kirsty and Rachael saw that the cage door was open, they should have assumed Nibbles was Dead with a capital D and written off their friendship with Jamie and headed over to the mall to buy earrings at Claire’s for some retail therapy.

That hamster is D-E-A-D dead.

And while we are on the subject of unrealistic expectations, let’s talk about the climax of the book. This is how Kirsty and Rachel finally rescue the fairy hamster: they tickle the goblin’s feet until he can’t handle it anymore and he asks them, politely of course, to stop please, and he will give back the hamster. Yes. Tickling. Ok, sure, manners are important and I guess it’s good that there is no violence in this book or whatever, but, kid, if a goblin captures your pet hamster in real life, you are going to have to smash that guy on the head to get back your little rodent. If the goblin hasn’t already eaten said hamster. See: Dead with a capital D.

Last, let’s take a look at the author’s use of language. Did you know there are many synonyms out there for the word “grin”? I guess this writer did not, because Kirsty and Rachel and Harriet grin at everything – at each other, at the hamster, at the goblins which is totally insane because they should be frowning angrily at the goblins because the goblins are being jerks running around trying to steal hamsters, but no, everyone is always doing everything with a grin or grinning excitedly or winking and grinning at the same time. If I did a shot for every time I had to read the word grin out loud, I would be in late stage liver failure and the book is only sixty-seven pages long. Why can’t anyone smile or smirk or beam? And don’t get me started on how much they giggle. Why can’t anyone laugh or chuckle or cackle? Everyone is giggling all the damn time in this book. Be more creative, people/fairies/hamsters/goblins. 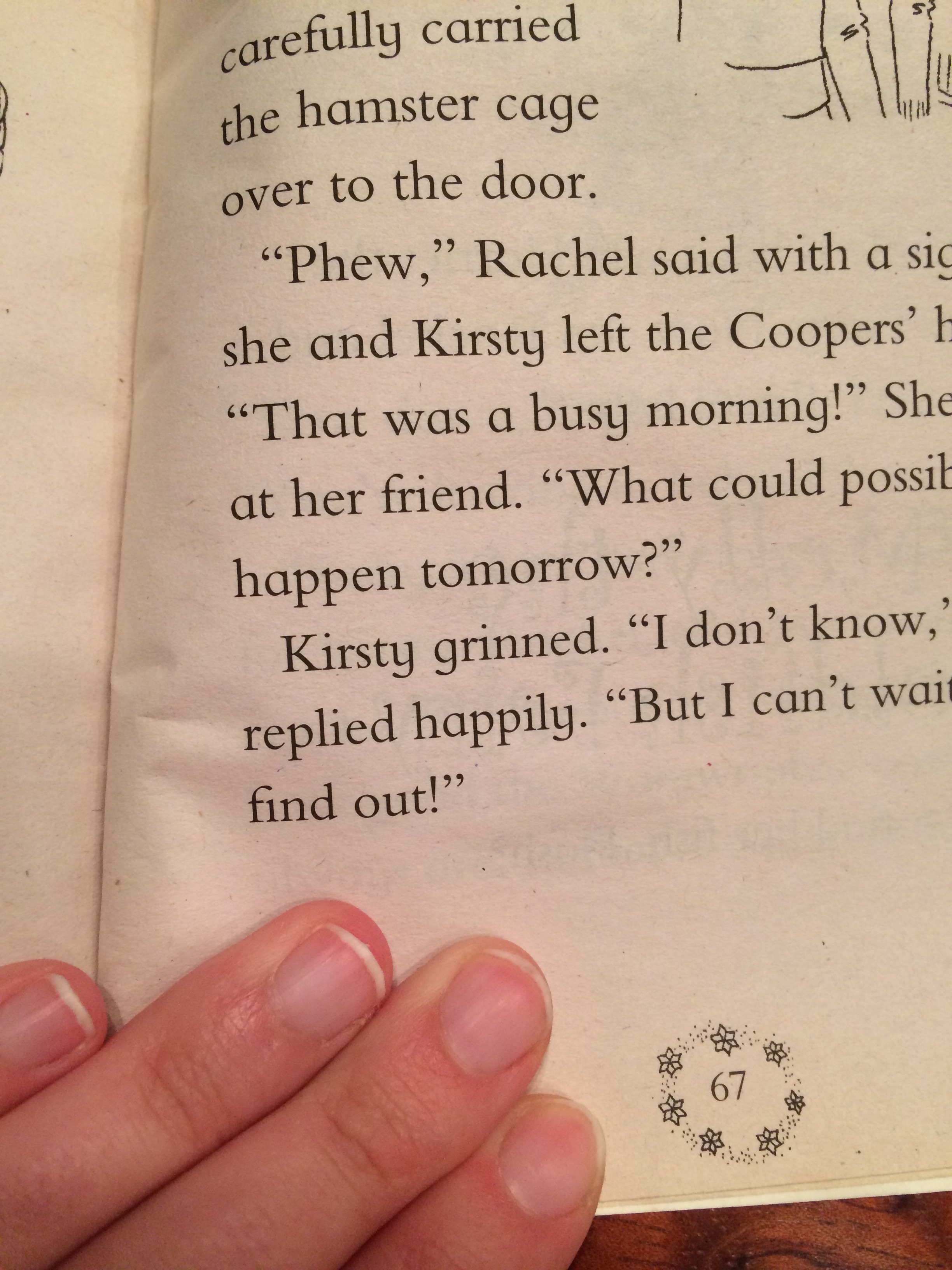 GRINNING ALL THE TIME.

In the end, I give Harriet the Hamster Fairy one out of five stars because, at least you can make the goblins sound like angry New York cab drivers when reading out loud, and the end of the book leaves the reader with a strong message that one should always clean up any mess that has been made in the living room, even if you, Rachel and Kirsty, didn’t do it and it was all the dumb hamster fairy’s fault that there are wood chip shavings and sunflower seeds all over the place. So enough talk, kids, and go clean up your messes.

Let’s hope Molly the Goldfish Fairy is a step up.