For the full interview, see it on Fiction Advocate.
Originally published on January 13, 2016. 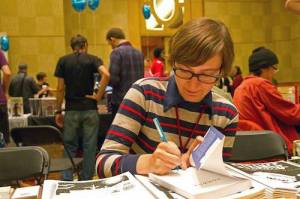 2016 is starting off with two milestones for Non-Fiction by Non-Men! This installment marks the tenth interview in the series and the first interview with a graphic artist and writer. This month, E.B. Bartels speaks with writer, cartoonist, and memoirist Liz Prince.

Liz Prince is the author of many collections of comics, including Delayed Replays (Top Shelf Productions, 2008), Alone Forever (Top Shelf Productions, 2014), and Will You Still Love Me If I Wet the Bed (Top Shelf Productions, 2005), which received the Ignatz Award for Outstanding Debut in 2005 and has since been published in both French and Spanish. Prince’s book Tomboy: A Graphic Memoir (Zest Books, 2014) was named one of Kirkus Review’s best books of 2014. She has also contributed to many anthologies; for a full list, see her website. Prince lives outside of Boston with her cats Wolfman and Dracula.